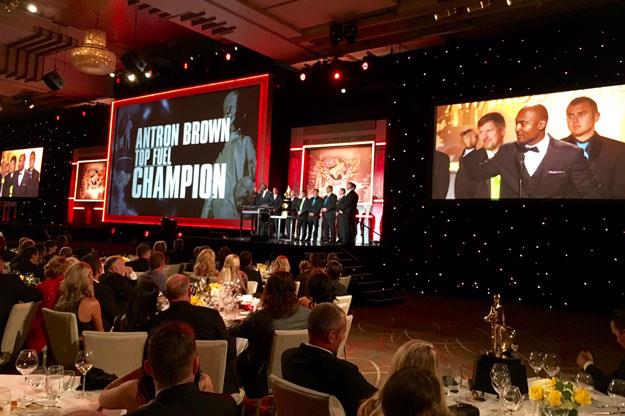 The four drivers were honored for their season-long achievements and presented with checks and trophies for winning 2015 NHRA Mello Yello Drag Racing Series world championship titles during the NHRA Mello Yello Countdown to the Championship, NHRA’s playoffs.

Brown, 39, earned his second Top Fuel world championship, which included a $500,000 bonus from NHRA and Mello Yello. He secured the crown at the penultimate race in Las Vegas on Halloween weekend. The driver of the Matco Tools dragster raced to a category-best seven season victories and seven No. 1 qualifying positions, including three playoff wins in the Countdown to the Championship. He is the only African-American driver to win a major U.S. auto racing season championship.

Southern California racer Del Worsham claimed a hard-fought Funny Car world championship title, the first in the category for the 25-year veteran driver. He won the world championship title in dramatic fashion by defeating rival and playoff top seed Jack Beckman in a winner-take-all head-to-head semifinal meeting at the final race of the season. Worsham, 45, raced to four victories during the season, all coming during the Countdown playoffs at the controls of his DHL Toyota Camry for Kalitta Motorsports. The NHRA Top Fuel world champ in 2011, Worsham joins an exclusive fraternity with Kenny Bernstein and Gary Scelzi as drivers who have won NHRA series crowns in both nitro categories. He also was presented a check for $500,000 from NHRA and Mello Yello for the championship.

Houston native Enders, 32, had a record-setting season in her red Elite Motorsports Chevy Camaro, earning nine victories in 11 final round appearances and six No. 1 qualifying positions to claim her second consecutive NHRA Pro Stock world championship title. She claimed the series crown en route to a Countdown playoff victory at Las Vegas. She earned $250,000 for the title from NHRA and Mello Yello.

Hines, 32, earned his fifth world-championship title in Pro Stock Motorcycle by racing to four victories in five final rounds on his Screamin’ Eagle Vance & Hines Harley-Davidson, including three victories during the Countdown playoffs. The Indianapolis rider, who is the youngest in NHRA history to win five series titles, was awarded $75,000 from NHRA and Mello Yello for championship. 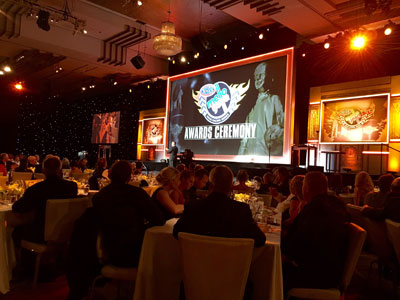 Pro Stock driver Drew Skillman was named the winner of the $20,000 Automobile Club of Southern California Road to the Future Award, which recognizes the top NHRA rookie performer of the year. Skillman advanced to his first final round in his pro debut at the season-opening NHRA Winternationals at Pomona. He then posted a runner-up finish at the prestigious Chevrolet Performance U.S. Nationals in Indianapolis and finally earned his first victory at the AAA Midwest Nationals in St. Louis. Skillman was the only rookie driver to qualify for the Countdown playoffs and he finished fifth in the Pro Stock points standings. The driver of the Ray Skillman Chevrolet Chevy Camaro received the award based on votes from a panel of the nation’s top motorsports journalists. The other candidates in the rookie class were John Bojec (Funny Car), Bob Butner (Pro Stock), Jenna Haddock (Top Fuel), John Hale (Funny Car), Alex Laughlin (Pro Stock) and Alex Prusiensky (Pro Stock).

Terry Chandler, who provides funding for the Make-A-Wish Dodge Charger Funny Car driven by Tommy Johnson Jr. and the Infinite Hero Foundation Dodge driven by Jack Beckman for Don Schumacher Racing, was presented the Blaine Johnson Award for her outstanding commitment and dedication to the sport of NHRA Drag Racing.

The 2015 NHRA Mello Yello Drag Racing Series awards ceremony will be available in its entirety to fans worldwide on the Internet on Wednesday, Nov. 18 at NHRA.com and the NHRA channel on YouTube.