Moser Engineering Thursday at the Sparco Fall Fling presented by OPTIMA Batteries opened up to cloudy skies with just slight bits of precipitation dropping out of the skies. A large group of new entries showed up this morning and received a time run while the balance of entrants waited for the first round to begin.

Consistent showers plagued for the better of an hour or so, but eliminations finally began around 10:00 in the morning, and continued on all day without any more “stuff” falling out of the sky.

In round seven, Wiggins ended Williams’ night. Pollard turned on the red-light to advance DiMino. AJ Ashe defeated Cultrera for a big win that included him earning the Bounty Award for defeating last night’s winner, a set of front wheels from Lindsay Racing Products, and in addition his 006 RT will give him the bye in round eight. Paschal ended Bloomfield’s night, and finally Dolan took his bye run. 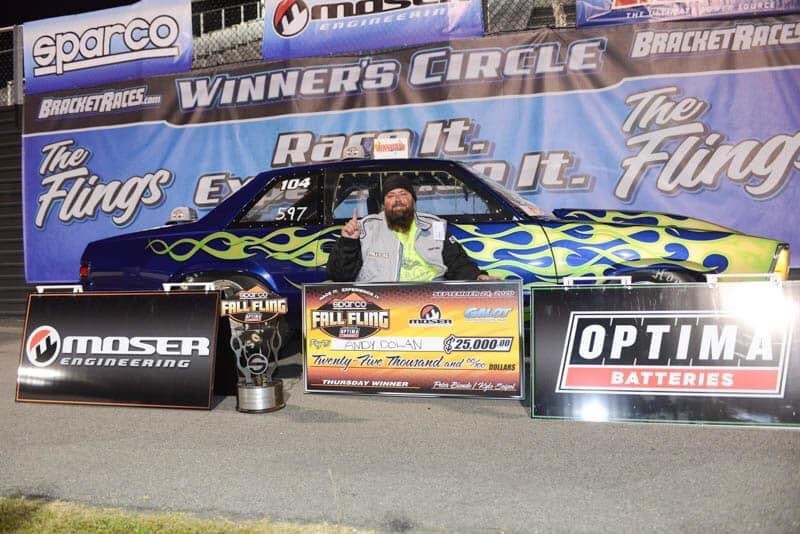 Round eight, the quarterfinals and Ashe took his bye run to advance him to the semifinals. Wiggins’ dragster faced off with Dolan’s door car with Dolan using a perfect reaction time for the win. Next up, the dragsters of DiMino and Paschal staged up and DiMino turned on the red-light to move Paschal into the semis.

With each of the remaining drivers already having a bye run, the bye reverts to the best reaction time and with his perfect RT, Dolan will get another bye run with his door car to advance straight to his first ‘Fling final round.

Before that final, Paschal and his dragster would meet up with Ashe and his door car to see who would face Dolan in the final. With identical reaction times, Ashe was able to hang on for the win to move his door car to the final marking the first ‘Fling final where two door cars will face off for the big prize.

In that historic final, it was over quickly when Ashe turned on the red-light by -.004. Earlier in the week, Dolan was asked if he was going to attend the ‘Fling Million contested next week at Bristol, “We’ll have to wait and see,” Dolan said. We’d have to say his mind is made up after tonight’s $25,000 win.

The main event of the weekend, the ATI Performance Products Friday begins in the morning with a $100,000-to-win race. MotorManiaTV.com continues to live stream the action with sponsorship from Hoosier Racing Tire and JEGS Performance. For all info and results, visit bracketraces.com.